is the fourth album from Chicago band, OK Go and I love it! 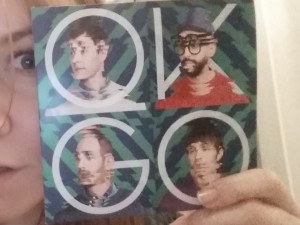 That could just be the end of the review right there, but that seems a little lazy.

A brief history of me & OK Go

I fell in love with OK Go right from the first song of their’s that I heard, Get Over It. I must have been in Sixth Form or a uni fresher when this happened, but I remember connecting with a few people at university over the band and even getting an old boyfriend hooked in the process.

I felt like their popularity in the UK never really hit the highs it should have done, and between their second and third albums they pretty much disappeared, from my life at least.

I found the third album confusing and it’s taken me literally years to get in to it, but then this week, the fourth album, which I’d pre-ordered, arrived from Amazon.

I’d already heard and seen their music video for I Won’t Let You Down, which is the 8th track on the album. You should check out the video. I’ve put it below to make it easier for you.

After this I was pretty excited about the album and pre-ordered from Amazon, who, but the way, refund you money off pre-orders if you could have bought it somewhere else cheaper.

It my head, the album name makes me think of PacMan. Hungry Ghosts are referenced in anthemic track 4, Turn Up The Radio.

Listen (read), I love this album, but I’ve never been particularly eloquent at explaining musical genres. My best effort is to say that this is a mix of alternative rock, with a pop, electronic edge. My boyfriend, who I’ve introduced to this, describes this as kitchen sink music, as in they’ve thrown in everything, but he means that in a positive way, so I’m told. He mentioned some other bands that they sounded like, but I don’t recall these. M83 were in there though.

I don’t tend to buy physically albums any more or even albums in their entirety, but I knew I wanted to own this. You really should listen to it as a whole piece, if you can. Going through the tracks in order just works. The tunes are catchy and the lyrics are thoughtful and poetic.

The best I can do is take you through my favourite tracks and give you my thoughts.

1. Upside Down & Inside Out

Man, this made my jaw drop, literally, and I do mean literally and not figuratively. This is a great song to start the album. It really does feel like the start of something.

3. Another Set of Issues

The beats in this song! I swear I could feel them playing inside my chest. I’m still trying to comprehend the lyrics “keep your head down, keep your hands where I can see them.”

I’ve interpreted this song to be about an extended love making session. A guy telling his partner that she needs to stay. This topic could have taken a sinister turn, but it’s soothing and persuasive. I’d be lying right back down.

7. Bright As Your Eyes

A happy, appreciative tune about sparkling eyes. It’s a simple, but touching statement.

Did you watch the video above? This is not my ring tone. This song totally pumps me up.

Wonderful lyrics again. I can imagine this song playing during a defining moment in a movie. It lifts my heart and makes me want to run towards someone in slow motion and grab them in a passionate embrace while the camera spins around us.

This track is when the album starts to take a slower, more melancholy sound. This song is about losing/not having someone and how small reminders can push you over the edge. It’s romantic and moving.

So, please, try this album and maybe OK Go will become your favourite band too.