Last week, just before I was about to go on holiday, I received a comment on this very blog, as well as a message through Facebook, regarding a cake I made to celebrate my buddy, Laura’s, 30th birthday.

The message was a request to use a photo of the cake on the CBS show, The Talk. The cake featured an icing image of Tom Selleck, naturally. My first instinct should probably have been ‘this is a hoax,’ but it wasn’t, it was ‘oh my goodness, Tom Selleck and his moustache are going to see my Tom Selleck cake!’

Trusting my instincts, I responded to the comment with great excitement before hastily trying to contact Laura and Sarah (who helped me make the original cake) as at 5:05pm when I was still in the office, there weren’t a great deal of people around that I could share such a thrill with that were

a) Going to understand what I was babbling on about

I also responded to the message, which was from a CBS email address and I was seriously hoping that it had not been made up.

A few short minutes later and an email came back from the CBS email address confirm that, indeed, they wanted to use our Tom Selleck Cake on The Talk to show Tom Selleck!

I hastily printed, signed and scanned the release form, sent it back to CBS and then on Friday 19th September, Tom was shown our icing likeness of himself.

I was a bit miffed to discover that I couldn’t watch the show in the UK and CBS refused to send me the clip in which my cake featured, but I downloaded the Chrome extension, Hola, to enable me to watch US programmes from the UK and managed to catch it.

It you can’t watch it, here’s the cake shown on the show: 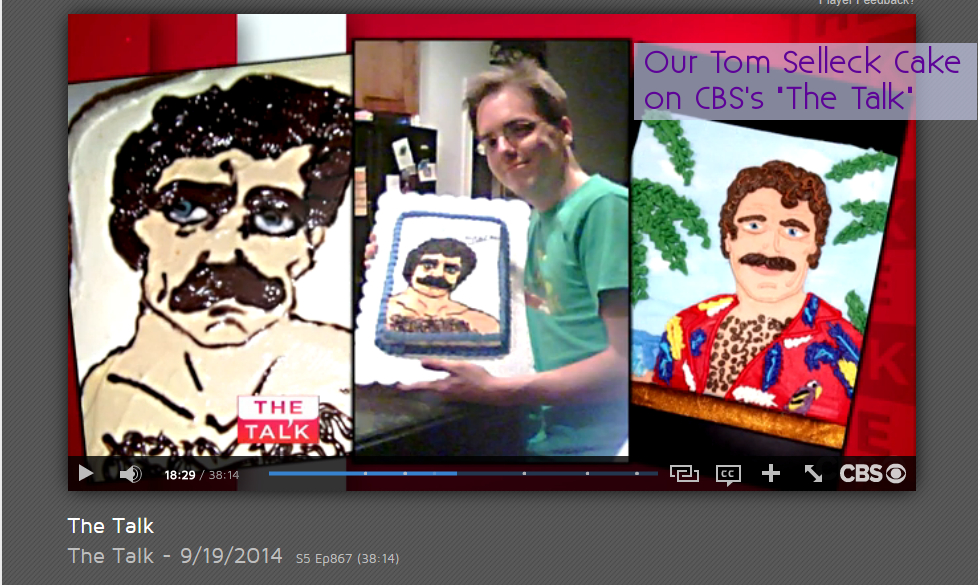 There’s my cake, on the left. You saw it here first!

Tom seemed to respond to this presentation of cake images with forced gratitude and then concern about which part people preferred to eat. Obviously it’s the moustache, Tom. There was also a slight edge of being genuinely touched by the display though.

And if you’d like a little Tom Selleck on the side, there is a clip of him from the show below, though it does not feature my baked delight.