If you’re in to Social Media, you’ll have struggled to avoid discovering the Social Media meltdown that was Amy’s Baking Company a few weeks ago, but if you’re not busying yourself with Social Media, as often as I do, then here’s roughly what happened.

The online crisis seemed to build after Amy’s Baking Company appeared on Gordon Ramsay’s Kitchen Nightmare’s in America and was further compounded by a particularly bad online response they provided across their Social Media channels. Though, from what I can gather, this wasn’t the start of poor online replies, it was just popularised by their appearance.

Apparently Amy and Samy, owners of Amy’s Baking Company, have been responding adversely defensively on Yelp for some time now criticising customers who criticise them. Oh dear.

After Kitchen Nightmares was broadcast, people took to their Facebook page with their negative comments and Amy and Samy didn’t respond well. They have since claimed that their Facebook, Twitter, Yelp and Reddit were hacked, but this feels somewhat unlikely to me.

They’ve since deleted the highly reactionary, inflammatory comments now, because, you know, they were written by a hacker, but by the power of the internet, I can show you some of the comments that were shown on the page in the gallery below. 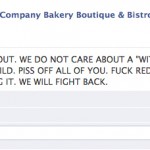 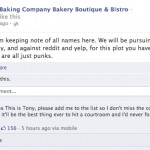 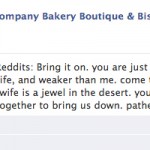 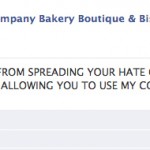 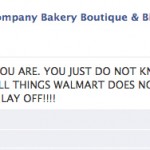 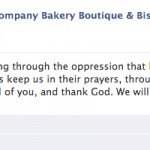 So, what can we learn from this incident? Here we go…

1. Have a crisis plan

If you appear on TV, you can’t always be sure of how you’re going to be edited and therefore how you come across (though it sounds like this couple should have had a fair idea), but you can be sure that someone in Social Media somewhere is going to have something to say about it.

Don’t pretend people aren’t talking about you. Whatever people are saying about you, this is an opportunity to show that you’re listening and open to engaging with your audience. Try and get back to relevant comments within 30mins – 1 hour, which means you’re probably going to want to make sure you’ve got Social Media cover whenever your show airs.

I know I’ve just told you to respond, but if you find yourself in a situation such as Amy and Samy, some of the comments you receive won’t be from genuine customers and the volume may just be too high to respond to everyone. You might not be able to respond fast enough and therefore will get no traction. A broadcast message to everyone might be more appropriate. You can then ask people to email you if they have a particular issue that requires resolving. You won’t get as many emails as comments.

Furthermore, some people will continue to complain and campaign even. Some people just won’t be happy even if you offer them the moon on a stick, so decide when you feel you have done enough to appease them and then just let it go. If you’re a good company with good customer service, you might even find that people step in to defend you.

Leading on the previous point, some people just like to cause disruption and jump on a bandwagon. I suspect a lot of people that were complaining about Amy’s Baking Company had never even been customers. Don’t pay any attention to the people that are blatantly solely commenting to cause trouble and gain a response. You will never beat these people, they have more time than sense and will use this time unproductively whenever possible.

I’ve seen this done a couple of times too; companies set up Social Media accounts trying to be independent customers to defend the company. Some companies have even used stock photos as the profile image, which is how they have ultimately been found out and there lies the problem. You can try this, but as soon as you’re found out you do look incredibly pathetic and have another crisis on your hands.

Social Media isn’t just about broadcast and responding, before that comes monitoring and listening. Even before Amy and Samy were on TV, they were experiencing negativity surrounding their business. I completely understand how criticism about your company can be hard to hear or read, but sometimes people have a point and if customers have gone out of their way to complain, then maybe you could take on their comments, learn a thing or two and improve your business.

So, there you go. Just a few things you can learn from someone else’s monumental error. Oh, and maybe don’t go on this type of TV programme if you get incredibly defensive to criticism.

Anymore lessons to be learned? Let me know below.