If you’ve been embroiled in some Facebook Offers related issues over the last few days, just calm down, relax and let me reassure you, everything’s going to be alright.

Today I logged in to Facebook to see what was happening on our company Facebook page. Had any of my friends ‘liked’ it? My mum had – yes! She’s nothing if not dependable. Had the Venezuelan family that enjoy our page posted more photos or their recent holiday? Sadly, no.

But a quick click through to my newsfeed alerted me that Facebook Offers has reached the UK. I knew these were being trialled, but I hadn’t read anything about them being trialled in the UK. It turns out that a couple of friends had clicked on offers, one of which was for cheap cinema tickets to somewhere called the MacRobert Arts Centre. Apparently this place is in Scotland somewhere. The friends in question live in Corby and Essex, they don’t know each other and it would be a bit of a coincidence if they were both planning a trip to this specific arts centre. I clicked to claim the offer. Within seconds I’d received an email to my personal account telling me how I could redeem it, which I had no intention of doing. Then I also went over the MAC Facebook page.

Tens of people were asking for their email addresses to be removed from some phantom mailing list that they had apparently now been added to, to which MAC had copied and pasted the same response each time, with the names changed. This message apologised, assured each commentor that their email address had not been retained and blamed Facebook for having a glitch.

Annoyingly, I have gone back to the page to try and take a screen shot of my beautifully crafted message and I don’t seem to be able to find it or any of the messages from people who were asking for their email addresses to be removed.

Little Miss Tact that I am my comment went along the lines of this:

Are you going to copy and paste the same message each time and change the name? While this might help people in terms of reassurance, it comes across as a little insincere.

They replied telling me that they wanted to acknowledge every single comment, which was fair enough. Clearly, I couldn’t leave it there, so helpful as ever, suggested this:

Nothing…and still the comments kept coming. So I went for the kill and posted this. 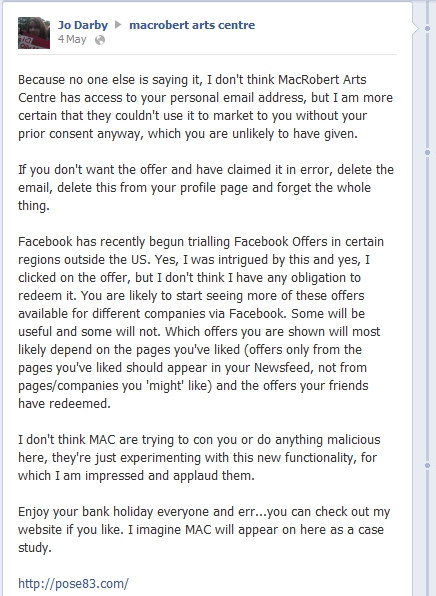 Eventually they posted their own comment as I’d suggested in the first place and there seems to be little evidence of the offers fiasco on their wall now.

They could have handled this better and I don’t appreciate the smiley/emoticon, but they probably got a lot more exposure than if they hadn’t bothered with the offer and I have to admire them for experimenting.

Apparently, Facebook offers are free; maybe that’s for the trial. They have been introduced to rival sites such as Group On and Living Social, who take between 30-50% of the deal price. I imagine these could end up as paid for as I hear Facebook are struggling to come up with revenue generating ideas, especially as they’re trialling paid for status updates in New Zealand ahead of Friday’s IPO. Yes, I thought this was a joke too!

I want to use Facebook Offers for our business, but I can’t at the moment because:

a) We don’t have a registered location on our page

c) I don’t think Facebook Offers is completely working yet

d) I don’t think users completely understand Facebook Offers yet and are just frivolously clicking on things they don’t know and then getting upset about the consequences, which actually aren’t aware as sinister as they’re being perceived.

While I’d love the be all maverick in Social Media and get on board early, I think I need a bit longer to decide if Facebook Offers are right for our company.