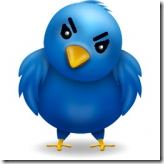 I was forwarded this article by one of my Customer Care colleagues the other day, which poses the question ‘Are Twitter and Facebook changing the way we complain?’

Twitter and Facebook are definitely changing the way we complain. As a Social Media Manager of a large brand, I can testify to this first hand.

However, this shift in complaining is also changing the way we handle complaints. There clearly is the humiliation factor of a company being named and shamed in social media (as cited in the article), but the majority of customers don’t really have a great enough amount of social influence for this to really make any substantial waves. The lifecycle of a tweet being something like 6 seconds and as much as we may believe that these incidents could go viral, there are plenty of companies out there ignoring tweets and still trading well (Dorothy Perkins springs to mind).

The reason that these complaints probably get resolved quicker is because, at present, they are being handled by people that are in a higher position to resolve them. Currently, the majority of our complaints still come through more traditional channels such as call centres and post and by their very nature these channels tend to infuriate people more, whether that be because they are kept on hold and therefore unable to go off and do other things, or they are awaiting a response by post.

With a tweet, you put it out there and wait for something to come back to you. As Social Media is still relatively new, it’s the Marketing Manager and PR people that are manning the accounts and who are keen to respond. Plus, even if no one responds, there is the hope that some customer somewhere will see you message and avoid the brand.

For us, complaints through Social Media have highlighted some holes in our propositions and marketing and given us the opportunity to clarify issues and answer questions. We’re not responding because customers are humiliating us, we’re responding because they are our customers. We’d prefer they talked to us than just abandoned us and these are the channels they are using so we need to be in them. We’re still picking up the phone and opening letters too.

We encourage customers to email us, mainly to keep personal details private and to address each case individually. It’s genuinely not because we’re trying to hide anything. But if a customer is clearly in the wrong, we do point this out in the most polite manner possible because this helps everyone learn about how our products and services work.

As a prevalent Social Media user, I’ve done it too. I’ve complained in Social Media. I’ve felt almost relief when my comments have received a response and remain frustrated when they’ve gone ignored. But a lot of social media content is about release, putting something out there to getting a reaction, expressing an emotion, garnering support.

We’re evolving the way we communicate in general. It’s a good thing. It makes people accountable. It gives worthwhile thoughts and ideas a platform, as well as ranty, disgruntled ones.