A lot of people tell me they don’t get Twitter. In it’s simplest terms, Twitter is a micro-blogging site. This means that each entry on Twitter, which is known as a tweet, is micro in size, in fact it can only be 140 characters long.

So, you know, it’s kind of popular and kind of a big deal. I’m not telling you you have to ‘do’ Twitter, but maybe have a little play

So much stuff! Most people I come across just think it’s for status updates like on Facebook, but limited in length. THIS IS NOT TRUE! These people aren’t using Twitter to it’s full potential and I totally understand why they don’t see the point in it, if this is what they believe to be it’s only application.

You’ll need to start at Twitter.com and register, but that’s pretty simple, similar to how you would sign up to any other website.

Choose your username wisely. Firstly, if you want people to mention you, comment on your tweets or (old style*) retweet you, you have to bear in mind that your username will use up some of their 140 characters. Therefore the shorter the username the more characters people have remaining to respond to you.

Also, think about who you’re going to be responding to on Twitter. You might well be keeping this handle for some time to come, so make sure it’s not offensive and suitable for all audiences.

You will be able to change the name that comes up on your Twitter account (mine is ‘Jo Darby) but it’s harder, though not impossible to change your username (mine being ‘Pose83’).

You should also check the Social Media policy of your employer, if you have one, as they might have restrictions on what you can and can’t put in your Twitter name.

If you work in Social Media, Marketing or Human Resources, you might also want to ensure that there is a Social Media Policy in place for the company you work for. I’ll write more about this, but eConsultancy have a good template for you to work from.

You can customise your Twitter page if you want to. Mine isn’t heavily customised, but I have profile image and a bio.

From your Twitter page (www.twitter.com/[username]), when you are logged in, you can click edit your profile in the top right-hand corner and you’ll get this screen. 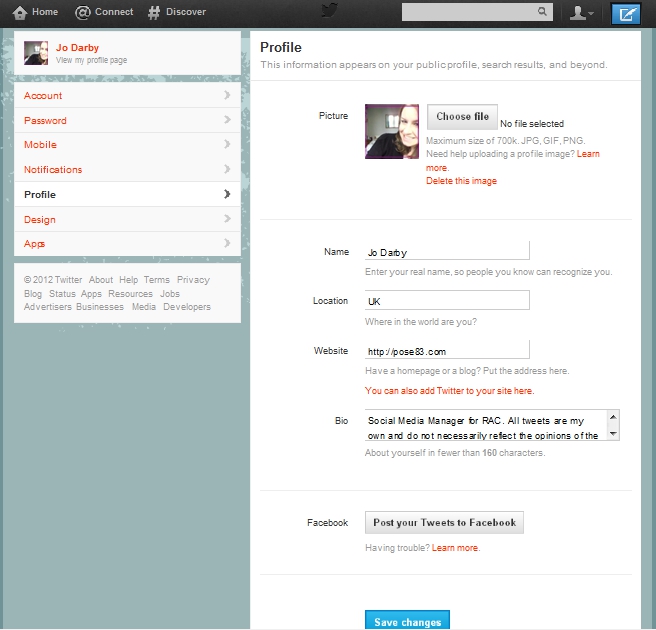 I would advise you to add a profile photo. It’s only going to appear small in most instances, so you want something bold, a logo or a head shot perhaps. Get rid of the generic egg that appears ASAP. A lot of people will pretty much ignore you if you have that egg in situ. It makes you appear to lack credibility.

As for your bio, try and make it short and snappy and again, you might want to check you employers policy on declaring that you work for them, especially if you’re going to be commenting on things to do with work or the industry you work in. In my bio is states who I work for and that all opinions are mine and do not necessarily reflect those of the company I’m employed by.

OK, you’re pretty much set up to getting tweeting now. But wait! You should probably investigate a little further before you jump right in.

Twitter have a handy little discover button at the top of the screen that you can click. This will suggest who to follow and show you stories tailored to you. Might be worth hitting that.

Within Twitter on the left hand side you will regularly see a box displaying trending topics. This can be altered to show country or globally (and dependent on availability, by city too). This will show you what everyone else is talking about. Click on one of the trends and you can see all the messages within it. This might also give you a few more ideas for people you want to follow.

Just search for some people or search terms in the search box at the top of the page. Some interesting stuff might pop up.

A lot of brands, celebrities and people will promote their Twitter accounts through their other Social Media channels or through their websites. Look out for the Twitter icon

What does this symbols mean?

You’ll see a lot of these things

The symbol is called a ‘hash,’ though I’ve heard it called a ‘gate’ too. It’s previously been used to denote a number, but this once under-used little symbol has really come in to it’s own with the advent of Twitter.

The hash is now put in front of a word or phrase to create what is known as a hashtag, for example #London2012. Hashtags are primarily used to group and sort information to make it easier to find.  For example, if you were making a comment about an athlete at the London 2012 Olympics, you might append the tweet with #London2012 (note, no spaces) or #GoldMedal. They are added by the tweeter though, so their is no guarantee of their reliability. The benefit of this is that anyone searching for this hashtag will see your comment and you could potentially use an established hashtag to help promote your message.

They are no longer just confined to Twitter. In the modern vernacular they are appended to pretty much anything.

Be careful which hashtags you jump on though. There have been some incidents of people using hashtags surrounding negative or upsetting news stories and getting really shot down for doing so. The most recent incident I’m aware of was after the Aurora shootings at the showing of the Dark Knight Rises where a fashion company saw fit to do this. 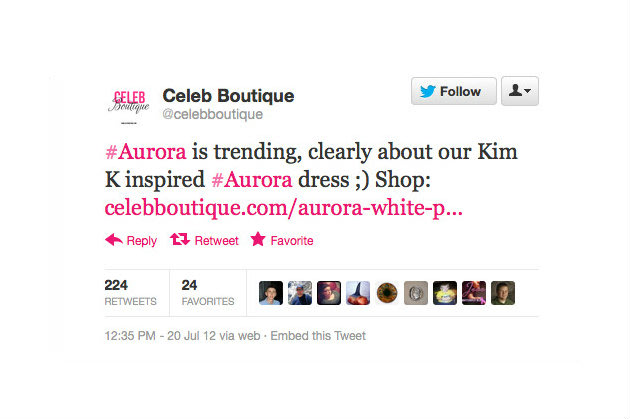 It pretty much went viral for all the wrong reasons

The difference between old style and new style retweets

I actually only discovered the difference between old style and new style retweets quite recently, but as I mentioned it above, I thought I better let you know which is which. An old style retweet is how people used to retweet in the olden days. Someone would copy and paste a tweet by someone else and put the author’s username in front of it for example this is an old style retweet I posted of my friend, Gemma’s post. I felt the world needed this tip.

The new style retweet means that the tweet can be retweeted in it’s entirety without losing characters to the username. There is an icon on Twitter (and other tweet management systems) that allows you to retweet. It looks like this. 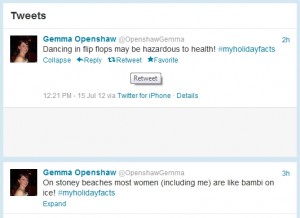 You click expand, which you can see in the lower tweet and then you have the option to retweet and if you press that, you’ll get something that looks like this.

It’ll show this in both yours and the person that you retweeted’s Twitterfeed.

We’re probably getting a little advance with the retweets, so I think we’ll leave the lesson there.

Next up, Twitter management tools. These will help you manage your Twitter feeds and make them more meaningful and easier to digest.