This passed weekend I ran the British Heart Foundation Santa Jog with my big brother, Chris. You could either run 3km or 6km, though someone decided to sprint the route 3 times, racking up 9km. We went for 6km, because, you know, we’re athletes; the kind of athletes that get drunk on Bailey’s the night before and eat mince pies and Christmas biscuits directly after. We totally nailed some sugar free Powerade too, though Chris had to take the lid off mine for me as I was so struck with fatigue (and ineptitude).

It wasn’t the most well organised running event I’ve ever been too. Directions to the venue were sketchy and there was no clock to monitor our time. Chris recorded his at c27 minutes. I didn’t check mine, but I’m estimating about 40 minutes on a course dogged with…er…dogs (I actually petted one during my run), women in double file with pushchairs and members of the general public, plus the home straight was up hill and muddy, ruining what would have been an epic sprint finish I’m sure.

There also weren’t as many people there as I’d expected, but Santa Jogs seem to be becoming increasing popular. I was aware of another one in Birmingham over the weekend and at least 3 advertised in Cardiff for various charities.

However, it was pretty fun to see all these Santas jogging about the place though. I passed my brother running the opposite direction on my second lap and we duly high-fived. He finished well ahead of me and then came back round the course to run the last 200metres with me, something I’d really hoped he would do. When did my brother become so thoughtful?

My sister-in-law had acquired an impressive zoom lens camera and papped us throughout the race, so here are some of the pictures she took. I especially like the distance shot where you can see two Santas (me and my bro). Mum was a little further up the track. 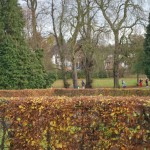 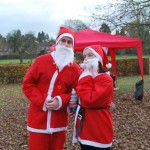 I’m back in to running now. It is pretty addictive and it’s a great stress buster. I definitely need to improve my stamina, but I feel stronger and faster and firmer too. I know running’s not for everyone and Chris and I have both had issues with our knees. Plus, I read on Yes and Yes about a woman who only got in to running after a breast reduction. Luckily, mine aren’t that immense in size and running seems to be giving them a boost too. (Sidenote: I should probably stop chatting about my boobs so much).

I’m considering hitting Park Run at the weekend. If you don’t know about Park Run, it’s a running meeting held every Saturday morning. It’s a 5 km course, run by volunteers and it’s completely free. Just need to print and laminate my barcode so I can record my time. They hold meetings all over the country (UK). I’ve heard various opinions on Park Run, but most of them have been positive. Will let you know how that pans out.

Also, we didn’t raise sponsorship for the Santa Jog, but you can donate the British Heart Foundation here. It’s a worthwhile cause.