I don’t like going to the gym. Some people do. They get a rush and they do multiple classes in one session, but I am not one of those people. 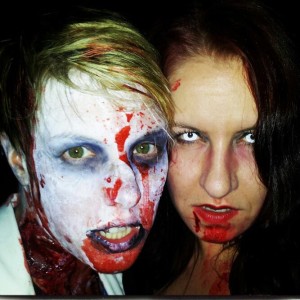 What I’d look like as a zombie (right), with my friend Morag.

However, I understand the need for regular exercise, despite doctors this week claiming it has very little effect on obesity (I am not obese though). So, I’ve had to rationalise it in my head. A friend recommended doing exercise that I enjoy. I can’t think of many forms of exercise that I can just blitz for an hour and will enjoy, so I’ve had to get my head around it in another way. Therefore I’m not ‘going to the gym’ any more. I am Zombie Apocalypse Training.

This idea stems from something I saw on the God Facebook page. God had asked his subjects/followers/whatever if they were ready for the apocalypse and one person responded with

Give me 6 months to work on my cardio.

I immediately empathised with this. Mentally, I was prepared. My boyfriend and I had frequently discussed what we’d do, where we’d go and who we’d take. In fact, I’ve discussed this with a whole load of people and generally, my skills as a Digital Marketer are pretty much null and void in an apocalypse type scenario. My mechanic boyfriend and cocktail skills are about the only trump cards I have.

That boyfriend is pretty damn ready for action, except for his penchant for lowered Hondas meaning we’d have to either take my 57 plate Renault Clio or steal something more sturdy with a higher profile. He is mentally tough and physically in pretty good shape too. He can run 5k in about 22 minutes, whereas I’m at almost twice that on an average day and about 35 minutes on a good day. I know he loves me and he’d try and help me, but I honestly don’t think it would take him long to leave me to have the flesh torn off my still warm body by the infected undead. My only hope at that point would be that he puts me out of my misery and quickly.

However, if I plan, then I have a better chance of keeping up with him, fleeing to Africa and starting a new life. So, Zombie Apocalypse training it is for me.

I’m working on cardio; running for both stamina and speed so my flight response is covered, as well as Body Pump for strength should I need to fight. I think 6 months at the current rate and I’ll be a lot more prepared. Then I’ll just be in the maintenance phase.

So, if you’re struggling with your gym motivation, you have one last lazy night to watch Danny Boyle’s prophetic 28 Days Later and then get to it!

See you on the other side!