I realise that by the time this entry is posted, the cake will be baked and hopefully there will be a beautiful picture at the bottom.

Remember that cake me made before for Paul? Well, it’s Laura’s 30th birthday (it was on 28th July). That’s Laura on the right, in the red, attempting to flick butter icing at me whilst we made the last cake. She’s helpful like that.

Sarah and I have taken it upon ourselves to make Laura’s cake and we thought we’d go back to the 80s and make her a Carebear cake. Every little girl had a carebear, right? Except I didn’t. Don’t feel bad for me, it’s OK. I had a Popple, a Cabbage Patch Kid (with blue hair)and a Tiny Tears, though my mum did give away my Petite Cooker way before I was ready.

Anyway, you don’t have to be too subtle with Laura to get information from her, so it wasn’t too hard to find out which Carebear she had as a child. Turns out it was this dude below.

Goodness knows what his special powers were. Is that how Carebears work, special powers and all that? I have no idea. He seems like a decent enough chap though.

So, we’re going to make a Carebear cake. We’re not sure how. We’re thinking we’re going to use butter cream and try and make it look like real fur. Maybe make the icing kind of custardy, which my friend, Christie, did with one of the 4 cakes I received last year. We’ll see.

So, here we are in present day, birthday over, cake completed and Laura’s website created. Yep, I made her a website to celebrate 30 years of her being here.

I can’t quite believe the response it got, over 550 hits on her birthday! I just hope she enjoyed it. It was great that everyone could leave comments and get involved. But you really want to know about the cake, right?

OK, then. Birthday Bear didn’t quite happen. Somewhere along the way we took a kind of creative change in direction, which was somewhat of a departure from the original concept. We decided to make a Tom Selleck cake. Who wouldn’t want to take a bite out of that hairy, moustached man, huh? Laura thinks he’s awesome.

We needed some inspiration.

It really wasn’t that surprising to discover that someone had attempted to create a Tom Selleck cake before, was it? Now, he’s not massively my type, but I can appreciate a fine looking older gentleman. Alicia Policia created this masterpiece back in June 2008. Laura was just approaching 27 then, I didn’t know her either and I don’t think she’d have been ready for it. Heaven knows I wouldn’t feel ready to be presented with a Tom Selleck cake at my current age (27 yrs old). But this is what we were aiming for. We most certainly were not aiming for this

I will post on the process of making this cake, but it wasn’t as simple as typing up a recipe. It was a long and laborious process, but it was a lot of fun, definitely worth it and Laura recognised him right away. Plus, I don’t think anyone has ever typed and said ‘Tom Selleck’ so many times in one week or used ‘Tom Sellecky’ as an adjective. Could we bring that in to the English language? Could we make that happen?

Anyway, you want to see the cake, don’t you. Well, here he is, in all his carrotty, butter creamy, chocolate icing glory. Tasted awesome too; kind of Tom Sellecky!

Yes, we are aware that he looks a little like Robert Winston. 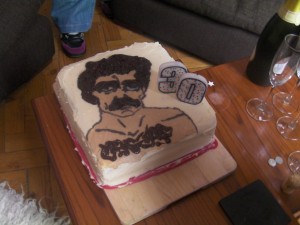