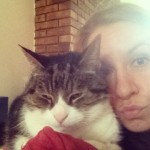 After spending most of 2013 living back with my lovely mum and our family cat, Bumble (left – he thinks selfies make people look too self-involved so he was ignoring the camera), I bought a new house in a lovely place with a rusty old car parked outside of it for the first 3 months I lived there and speculated about the dubiously-timed erection of the decking out the back. There may still be a body under there – The BBC aren’t interested but ITV might be (for real, kind of)! 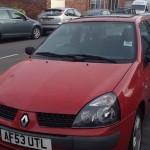 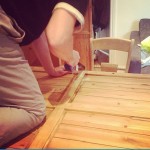 Dad in the dining room

My dad visited from Kenya too and helped me clean up 10 litres of spilled white emulsion and saw wardrobes in half (right).

I dressed up A LOT!

My best buddy turned 30 and she was Alice (she made her costume herself from scratch) and I was Queen of Hearts. The party included a tiny door, grass rug and toadstool chairs, cocktails in teapots and a 6ft caterpillar. 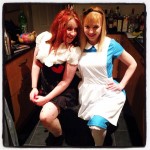 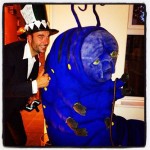 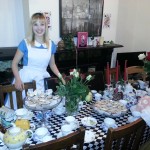 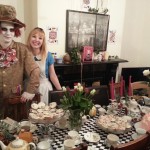 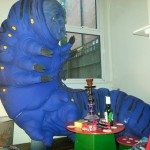 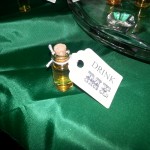 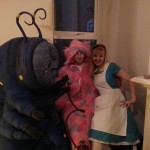 I was lucky enough to attend Goodwood Revival as my boyfriend was working as a race mechanic. Goodwood Revival is a classic car show in the UK where people dress up in clothes ranging from about 1920s – 1970s. We went with a kind of 40s era look. Oh and some of the boys from Sorted Food were there, thus making my year! If you don’t know who these lads are, please check them out, they are awesome and lovely gents. 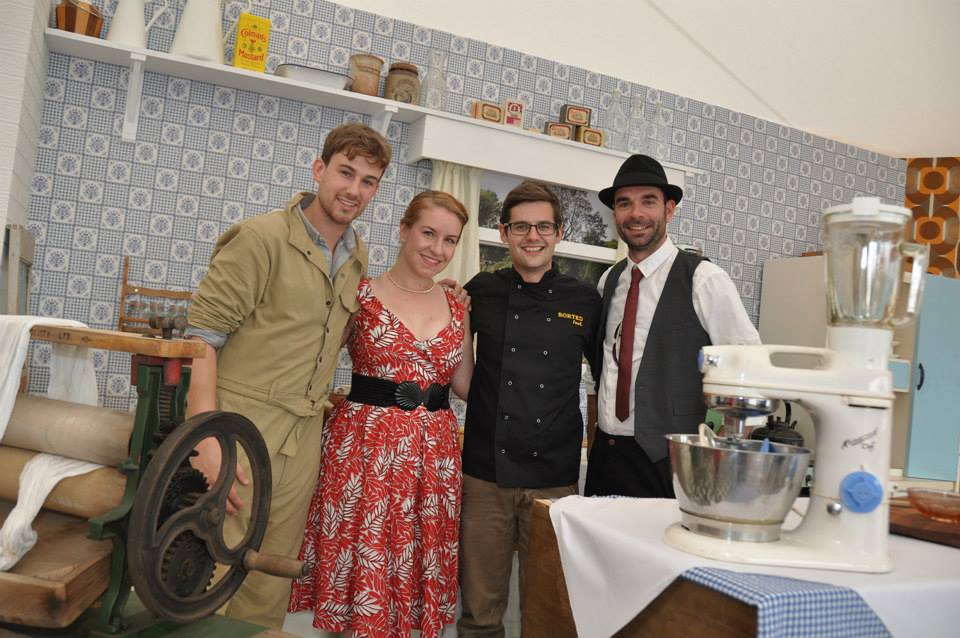 I thought I was being pretty damn smart this year with my Santa Muerte Sugar Skull concept for Halloween. Minimal costume, maximum make up effort, however, everyone else had the same plan. Loved this look all the same though, even though my hair went flat, some of my gems fell in my drink and my costume kind of matched my boyfriend’s, which isn’t a look I usually go for. Aforementioned best bud won the competition for the best costume for the second year in a row (last year was Corpse Bride) after slightly improving her boyfriend’s Cheshire Cat costume (which she also made – yes, this woman is some kind of sewing pixie wizard) from her birthday (above). 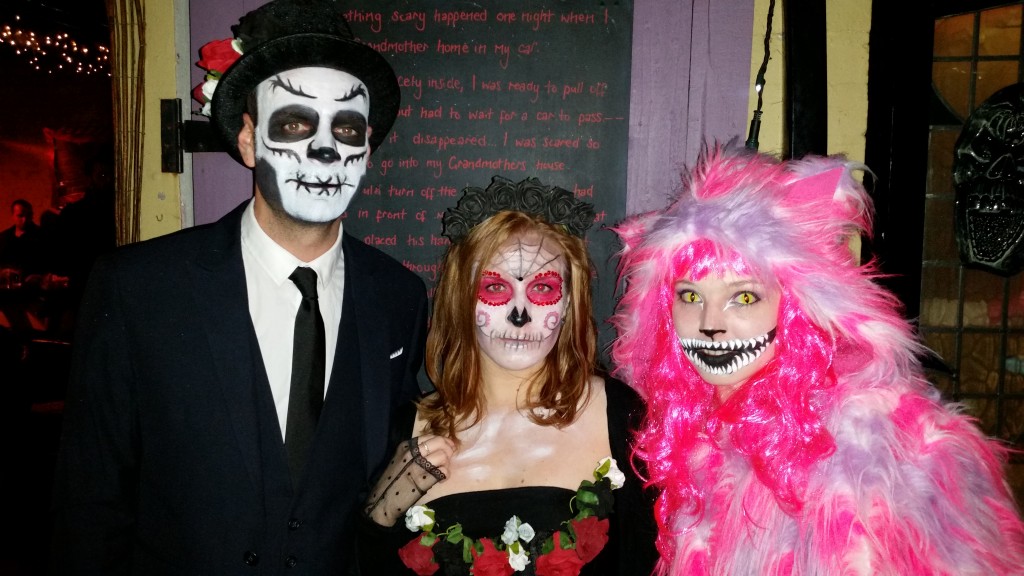 Me in the middle

After spending my 30th in 2013 basically larking about in America, I stayed home this year and threw a murder mystery with new and old friends. Between enjoying dressing up and being highly theatrical, my friends made it a truly fantastic night. I actually downloaded the set from Your Mystery Party and it was the best set I’ve ever used. Very flexible, with lots of advice.

I’m pretty sure that no one knew that I was supposed to be Andi from John Hughes’ Pretty In Pink, but it’s an 80’s classic, I’ve always loved the film and I’ve always loved the character. The original dress, however, is a little sack-like, so I gave it a little more shape when I recreated it. Sorry about the photo. I didn’t actually have any taken myself, so only have the ones from the official photographer. Other good 1980s costume theme ideas included: Coventry City’s 1987 FA Cup winner squad (I work in Coventry) Adam Ant Madonna Rubix Cube Tetris shapes Chris Waddle Darth Vader 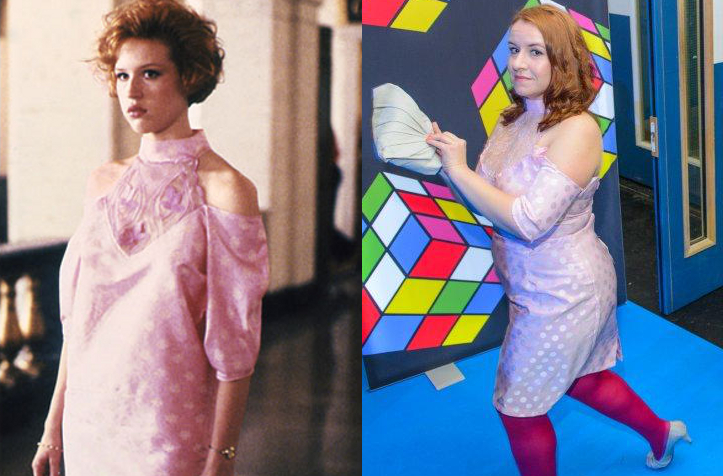 Andi from Pretty In Pink

I travelled as I try to do as much as possible…

I briefly went over to the dark side and tried my hand (foot / feet) at snow-boarding, but after 4 days and a lot of bruising, I returned to skiing. 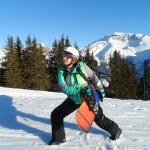 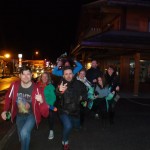 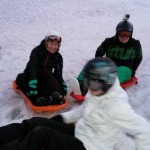 I went away with Hofnar again. I have been away with them many times, but I won’t be going in the 2014/15 season, sadly, as there are other plans afoot.

I couldn’t help but head for London later in the year for a little bit of a Hofnar reunion and a scavenger hunt, including fitting French boys in a phone box, dipping in the Serpentine and moustaches, because, why not?

I love my boyfriend, so spent 4/5 days travelling hundreds of miles by car and sleeping in the back of a lorry to watch him fix and maintain classic Lotus Cortinas in the cold and rain. To be fair, the scenery and racing was beautiful and fantastic and it was great to see him in action. However, I’m in no rush to join him again any time soon.

I finished the year, travel wise, with a week long trip to Barbados, where I drank rum, sang karaoke and put back on all the weight I’d lost, annoyingly. I needed the break though.

And this year, I was very excited to met and snuggle some completely brand new people, with my wonderful skiing friends Tash and James producing baby Dominic aka Rambo a little earlier than planned in May, my awesome Scottish buddies in Manchester, Morag and Rory providing the world with mini Morag, Freya in September and finally my old colleague and long-time Brummie friend, Sarah, giving birth to Michael (who looks like a tiny Patrick Stewart) in December. Amazing!

This year was by not means perfect though. I had the unpleasant task of having to sack someone, which was probably the hardest day of my whole career to date. I also had to evict a housemate for being rather gross in my bathroom.

I have big plans for 2015 though. It’s going to be another big year of change.