UPDATED: I Really Like You! The Carly Rae Jepsen Revival? 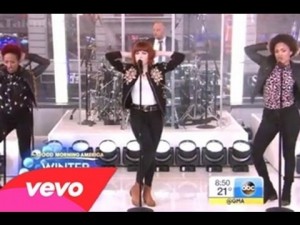 Last I heard of young Carly Rae Jepsen was that she’d happily retired on the royalties of Call Me Maybe and was residing in the same gated community as Toni Basil and Rick Astley, where Rebecca Black has a small condo too and Meghan Trainor is viewing property.

If you’re not getting the hint, I am implying that she is a one hit wonder.

But rather than just pulling a Frankie Muniz and retiring to race stock cars, or whatever it is he does, she’s determined to have another crack at the limelight and the PR push is working well.

There is currently only audio for this track, with rumours of Justin Bieber (still relevant?) and Tom Hanks (should know better) appearing in the video. I’m expecting big things for this video, because the song, I Really Like You, certainly isn’t going to carry it.

Call Me Maybe had that adorable (I’m not being sarcastic) [SPOILER ALERT] gay twist at the end, but it was really the endemic ear worm that caught people’s imagination and got people creating all sorts of video homages and spoofs. It’s difficult to recreate that kind of popularity from the same artist, just ask Psy.

This sound is 80s pop, from the setting on the Casio keyboard to the pithy lyrics. When Carly performed this track on Good Morning America, she even looked and moved like Tiffany.

I don’t know, maybe I’m just not one of the cool kids, but I don’t see any signs that this is going to be a strong recovery, except for 101 content sites covering it earlier in the week. I actually preferred that song she did with Owl City.

UPDATE: As rumoured above, Tom Hanks and Justin Bieber do actually appear in the video (see below). And as mused upon above, the video does actually carry the song and it’ll probably be a hit on YouTube, if nowhere else. My first thought on seeing the video? I hope Tom Hanks isn’t in some kind of financial difficulty.

Tip: If the presence of Justin Bieber offends you, stop watching before the 3 minute mark. You have been warned!