Just boarded train for Singapore after 24 hours in Malaysia. We’ve seen Merdeka Square, Chinatown (Julan Petling), Little India, Central Market and finished with the Petronas Towers (the tallest twin towers in the world at 452m. Seems like a unfortunate boast, plus the tallest building in the world is almost twice their height – BOOM! It’s in Dubai; where else?). We were both a little giddy from the altitude though (387m, floor 86) and we were probably quite annoying to other tourists, with Claire demanding elaborate shots and me mimicking King King on the scaled down model if the top of the second tower (or maybe the first, they seem identical).

I have just velcroed up my curtains & am whipping off my bra. I refuse to sleep in my bra. That’s for girls who fear their breasts will go saggy. Mine will never sag!

My arms however…
I hadn’t really realised the impact regular exercise had on my body until I abandoned it for two weeks. For some reason I’m running a 10k the day after I return, which seems like a foolish idea, but I’m looking forward I getting back in to training with a gentle 5k jog on Saturday when I return. 10k I’m not so sure about, but I’ve done it on the treadmill so I should be OK outdoors, in the morning (I’m an evening runner) with little to no exercise in the preceding fortnight. Bring on the 20k in 6weeks!

What have I done?

00:41 6th Sept
Just discovered (rather wide) train door open on way back from loo. One ill-timed jolt could have resulted in me falling fatally from the carriage. It’s mercilessly hot in here though so I left it wide open and prayed Claire stayed where she was in the top bunk.

I am so, so warm and sticky! Will I sleep at all before we arrive in Singapore?

Had I been asleep, I wouldn’t be now as the train jolts in to it’s next stop with such ferocity. Hope no one was standing by the open door!

Just paid S$20 to get in to our hotel room early after a 2 hr trek across town on public transport (I wanted to get a cab, the current situation between me and Claire is a little frosty).

Don’t bother with the sleeper train from KL to Singapore. It’s not worth attempting to save the extra day. The day trains are quicker anyway. Lesson learned.

[Sorry for any errors caused by iPhone usage] 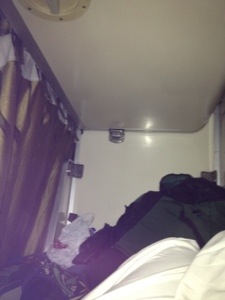