Sentosa: All aboard the monorail for controlled fun

Yesterday, after dinner we decided to head from Sentosa for the free (according to the Lonely Planet) laser show on the (man made) beach. Sentosa is an island to the South of Singapore, which has various transport links, including a monorail, bus, cable car and walk way.

Sentosa means peace and tranquility in Malay. This name was chosen by the government during a rebranding exercise upon deciding the redevelop it into a holiday resort. The initial name had been discarded probably due to it’s meaning of Island of Death from Behind (Pulau Blakang Mati), which apparently points to a legend of someone who was murdered there behind a hill). Claire and I mused that this was and probably still is a popular location for the public execution of anyone contravening the many stringent rules and laws governing Singapore. Hey, who doesn’t love a public execution with a 37 metre Merlion shooting lasers from it’s eyes as a backdrop?

Travelling South from Chinatown, we wanted to experience the cable car as yet another mode of transport on our travels, but at £10 each and a 30 minute journey, from which we would have to return almost immediately, we plumped for the £1.75 monorail. We hadn’t been on a monorail yet, so it all helped rack up our total vehicle variety count.

Watching Sentosa from the monorail it appeared to be crossed between a bad theme park with a scarcity of rides and Butlins. It’s the kind of place my brother and I would have begged our dad to take us as children, but as an adult I’m glad he never relented, taking us rafting in France instead. Even the Lonely Planet guide refers to it as plastic. Dashing from the monorail we could see the lasers behind the trees, though it transpired that this attraction was ticketed. The show had already begun, so we watched the lasers fire through the undergrowth and the fireworks top the trees for 5 minutes before the show concluded.

Claire has observed that Singapore seems to give you just enough information to get by on, but never enough that you could ever feel fully informed. Don’t let them know too much, Singapore! Hence, we weren’t aware of the requirement for a ticket to see 20 minutes of flashing lights.

Everyone loves a mime?

Discovering all other attractions were either too expensive or closed, we perched on some steps and watched a busker-come-children’s entertainer drag out a 10 minute set for c45minutes. During this time we witnessed the impact that limited free-thinking has had upon the citizens of Singapore as first a child and then her mother failed to grasp basic mimed instructions. While I appreciate not everyone loves a mime, why draw out the experience of interaction with one any longer than required? The entertainer threw in some casual racism and other more entertaining mannerisms and it was OK actually. We didn’t give him any money though.

We explored the park under the illumination of many fairy lights, accompanied by some 50’s style swing music, which we danced, skipped and frolicked to, swinging around lamp posts, running up and jumping off steps and me proclaiming I’d ‘never felt so alive’ and ‘if you can’t dance at Sentosa, where can you dance?’ in a Disneyesque manner. This was my favourite part of the evening. It was like being a big kid and felt even more illicit due to the close guard of the ever present CCTV. Surely I was about the be shot by a government issue sniper at any moment for the sheer look of non-mandated glee on my face?

Thankfully not and we continued on to a more adult section of the parks, with chain bars and restaurants. If we’d eaten dinner in Chinatown, then this was Little America. I ran through a series of ankle high fountains and pretended I was in an 80’s music video in the mist surrounding the Universal Studios sign.

I’m sure Sentosa keeps the locals happy and amused, but it still felt a little sterile to me. It’s all so predictable. I had fun, but largely because I was messing about with Claire and not because of the amusements.

FYI Terra Mitica in Spain is much better! 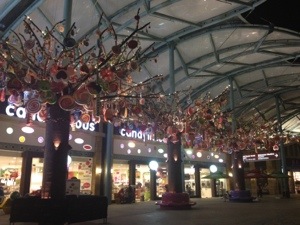 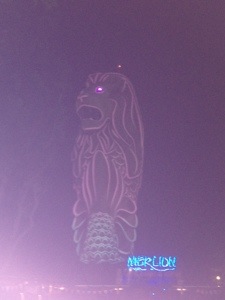